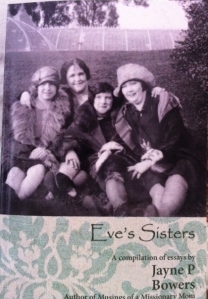 It’s already started, “it” being the criticism about my newest book, Eve’s Sisters. I’m pretty thick skinned, a prerequisite for a writer to keep on putting pen to paper, or in my case, fingers to keyboard. Still, the questioning about my knowledge and the subtle but sure suggestion that just maybe I should check with well-known biblical commentators before forming my own opinion, well, that rankles.

I know the importance of checking and double checking one’s sources. At the same time, I also know that it’s quite permissible, even desirable, that a person form her own opinion at some point. It’s always been my nature to think a little outside of the box and to peer beneath the surface of things. An open minded gal, I’ve always enjoyed being exposed to different ways of thinking and incorporating some of those ideas into my own.

A woman can understand and write about the psychological aspects of the women in the Bible just as well as a man can. In fact, in some cases, her gender gives her a more accurate understanding into the hearts and minds of the women who lived so long ago. Can a man comprehend how Hagar must have felt when Abraham banished her and their son Ishmael to the desert with a container of water?  Can a man understand how Leah must have felt to be the #2 wife in her husband’s affections although she was the one who gave birth to six of his sons? Can a man accurately feel empathy for the woman at the well, the first one to whom Christ revealed His true identity? I don’t think so.

The criticism was leveled at my comments about Vashti, the queen who was replaced by Esther in the Old Testament. Vashti was a woman of courage, a woman who had the gumption to say NO to the king when he asked her to appear before him and his fellow “merry makers.” The scriptures reveal that she was modest, courageous, and beautiful. However, they aren’t so clear on Vashti’s fate except to say that the king divorced her and set her royal crown upon Esther’s head and make her queen.

Enough venting! How can I claim to be thick skinned and yet go on and on and on about how right I am? Crazy, huh?