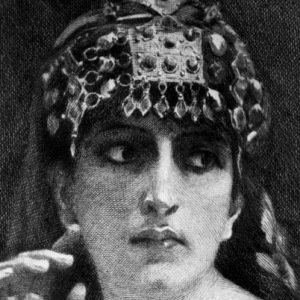 I honestly thought I was DONE with writing about women in the Bible after Eve’s Sisters was published, but that was before some facebook comments about Samson and Delilah got me to thinking about seduction, love, trust, and betrayal. I don’t pretend to understand the mysteries of love. I’m just trying to figure out why this story is such an important one and what we’re supposed to take from it.

I was going to post these comments on my Eve’s Sisters blog, but it seems to have disappeared. So…..I’m copying and pasting them here.

Some facebook posts on how the length of a woman’s hair contributed (or not) to her overall femininity ultimately led to someone making a remark about Samson and Delilah. I’m not sure how Samson’s hair fit into the discussion, and I have no knowledge of the length of Delilah’s locks. I just know that reading the somewhat humorous discussion made me think about the couple.

I also found myself wondering how I could have omitted this deceiving damsel in Eve’s Sisters, my recent book applying psychological principles to the women of the Bible and comparing them to the women who live today (had to get a little plug in for the book). The omission could be because she wasn’t exactly one of the paragons of virtue, faith, or charity. And apparently, she wasn’t struggling with esteem or abuse issues. Nor did she have relationship challenges. She knew exactly what she wanted and went after it in a determined and heartless (my opinion) fashion.

As a little background, Samson was a judge in Israel whose “calling” was to begin deliverance of the Israelites from the Philistines. He served in this position for 20 years, and I think that sometimes people overlook that important fact when they consider his life. Instead they dwell on how strong he was physically and how he weak he was emotionally. Here was a man who once killed 1,000 people with the jawbone of an ass who couldn’t resist the cunning seduction of a beautiful temptress.

In Samson’s defense, the scriptures tell us that he loved Delilah. He didn’t just lust after her or think she was attractive. He loved her. I could go on and on about how love makes a person do crazy things, but I won’t. I’ll just say that Samson was so blinded by love that he couldn’t think straight. She just about drove him crazy with her persistent asking about the source of his strength, and finally after the fourth “enticement,” he told her about his hair.

I wish I knew Delilah’s true feelings for Samson. I’d like to think she felt some strong affection…at least. What I do know is that the promise of money was stronger than her feelings for Samson and that she was relentless in her quest to discover the secret behind his mighty power.  Did she feel remorse when they took Samson away and gouged his eyes out?

In the short run, Delilah prevailed, and Samson was taken away to work in a prison. Ultimately, however, Samson’s strength returned as his hair began to grow, and he killed 3000 people when he lifted and released the pillars of the temple. As mentioned, his calling was to begin deliverance from Philistine oppression, and he did this. It’s unfortunate that he had to die with them. Did Delilah die too?

It’s funny how names become symbolic of personalities, and as I write this, I can hear Tom Jones belting out his famous rendition of “Delilah,” a song relating the story of a deceived lover who stabs his Delilah. If deceit symbolizes Delilah, then strength symbolizes Samson. Despite the fact that he entrusted his secret to the woman he loved, he still fulfilled his mission and is mentioned in the “Hall of Faith,”

What does this love story mean to you? Have you ever pondered its significance? Do you know some Delilahs who use men to get what they want? Do you know of some otherwise strong men who have been weakened by love for a woman?