Speak to Me, Minnie 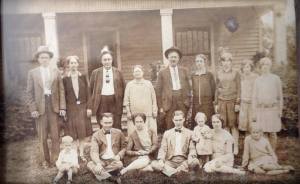 Minnie Laney Padgett, you have my attention. Although I never met you in person, I’m going to get to know you through records, research, and reading. As your great-granddaughter, I want to tell your story, a story that’s intrigued me since my husband and I made a side trip to Ellenboro, NC a few years ago.

We’d been traveling in the mountains of North Carolina, and on the way home, I persuaded my husband to stop in Ellenboro, a small town where my great-grandfather had once served as postmaster. I knew from conversations with relatives that my father and his sister Polly had spent some time there too. Since their father had worked for the railroad (a vague term but the best I can do until I do a little digging), the young family moved around quite a bit.

On that hot summer morning, I was especially excited to see the post office. Since Ellenboro is a small community with only a few streets, the post office wasn’t hard to find.  We parked on Depot Street, and I slowly walked over, surprised at the relative newness of the structure. If I thought I was going to feel Sidney’s spirit there, I was mistaken. Did I think that the building where my great-grandfather worked would still be standing?

I looked up and down the street and even sauntered up to the corner and looked left and right, front and back. Did Daddy and Polly walk to school along these streets? Where was the school anyway? Where did they live? So many questions, not many answers. We left the “downtown” area and went to the cemetery behind Race Path Church. That’s where Minnie became real to me.

We’d been walking around taking pictures of tombstones for only a few minutes when I saw the small stone of Lillie M. Padgett, “darling daughter” of Sidney and Minnie Padgett. It’s no exaggeration to say that I stood staring, startled and speechless, for at least a minute (a seriously long time for me). This precious child had died when she was only 5 years old. How? And why had I never even heard of her? I knew that my grandfather had a brother named Avery, but no one had mentioned little Lillie to me.

My heart hurt for my great-grandmother, a woman I’d had never known. How did she bear this loss? Was my grandfather any comfort to her? Where did she turn for solace? I sensed that this loss was especially difficult to bear since she didn’t have another child, my great-uncle, for another three years.

Otis and I walked around looking at other graves, but I always circled back to Lillie’s. Bless her little heart. And bless Minnie’s too.

Once on the road towards SC again, I called my aunt Polly and told her what I’d learned. She said that yes, she knew there was a child who had died but that she didn’t know much about her. At first, that surprised me, and yet I realized later that there are often events that take place in families that we know nothing about, especially when they happen before we’re born.

Later, Aunt Polly gave me a picture of Minnie, and I felt as though she was staring across generations right into my eyes. When I shared that feeling with Polly, she understood, thus encouraging me to explore the impression even more.

“I think she was overlooked and even forgotten,” I told Polly.

“You’re probably right. She had a hard life, no doubt about it.”

I later dedicated Eve’s Sisters to her, and Polly said she thought Minnie would be pleased.

Still, I can’t rest. She won’t leave me alone. I’m going to try to tell her story, and I’m going to follow a suggestion from Wally Lamb’s We Are Water.