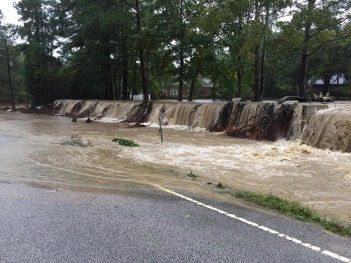 We’ve had quite the deluge here in South Carolina. Some people were hit much harder than others. Here on Brook Drive, we have water, power, dry floors, and reasonably clear streets. We have food too, and I’ve been practicing my culinary skills. Fortunately for us, we also have enough space to move about without bumping into each other 24/7.

Although I’m a little reluctant to admit this in view of so many others’ plights this afternoon, I’m going to risk the resentment, ire, and backlash to say that in some ways I’ve semi-enjoyed the days of being sequestered. If the roads were clear (and still there), I’d likely be traipsing off to Wal-Mart, meeting a friend for lunch, or setting out on an adventure of some sort.

As it is, however, I’m confined to the house for a bit and am determined not to harp on the horrid conditions or do what Albert Ellis refers to as “awfulizing.” It’s awful that bridges are out, homes are flooded, cars are floating, and people can’t get to work. It’s also awful that people are without power, water, and internet access. Some people have died. It’s all awful, and I don’t want to add my negativity to the already full slate of it.

That said, one of the things I’ve done to prevent cabin fever is read a lot and write a little. Yesterday I reread bits and pieces of A.J. Jacobs’ The Year of Living Biblically. Later today, I’ll likely write a review of it, but for now I just want to offer kudos for one of the best-written, most interesting, thought-provoking, humorous, serious, educational books I’ve read this year.

Somehow Jacobs, an agnostic, has written a book that discusses everything from polygamy to homosexuality and tithe paying to snake handling without being offensive or preachy. He reports interviews with rabbis, a Jehovah’s witness, an Amish man, fundamentalist Christians, red letter Christians, atheists, and dozens of other people, and he does so with respect. No one would be offended by this book, and every one (every open-minded one) would be better informed.

Another book I’ve revisited is An Unnecessary Woman by Rabih Alameddine. The story of an older woman living in Beirut who spends her days translating books into Arabic, the novel reveals much about her beloved city and books too numerous to mention. Having worked in a bookstore for decades, the protagonist, Aaliya, has become quite learned and frequently refers to passages in books and their authors. She also mentions classical music that has moved her.

Reading the novel inspired and educated me. While reading about Aaliya’s life, I jotted down several titles, authors, and musical pieces that I plan to investigate. In fact, I’ve already begun listening to classical music playing softly in the background while reading. (Amazon Prime makes this easily possible.) There’s something profound on just about every page of Alameddine’s book. Here’s an example: “Literature gives me life, and life kills me. Well, life kills everyone.” And a page or two later, “Beginnings are pregnant with possibilities.”

Yes, Aaliya, you’re so right. The rest of the afternoon stretches out before me, pregnant with possibilities of things to experience. One of the things I realized while reading An Unnecessary Woman was that no matter how dire the situation around her, including bloodshed, bombings, attacks, and malice,Aaliya’s life went on as “normal.”

No one’s life in South Carolina is “normal” today, but like Aaliya, mine goes on. For this afternoon, I think I’ll start with tackling an ant invasion (small black ones) and then move on to some school work. After that, I’ll consider waxing a newly painted bookcase, and later, I’ll again check on my fellow South Carolinians.

2 Responses to Rainy Days and Mondays