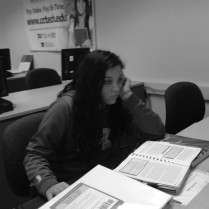 Online classes began at midnight today at Horry-Georgetown Technical College, the community college where I began my teaching career in the mid-70’s, and the traditional classes started about thirty minutes ago. Thinking about the nervous excitement felt by the students, faculty, and staff  has sent me back to a project I’ve been working on sporadically for the last couple of years. It’s a slim volume about teaching, part memoir and part how-to.

After graduation, I spent a brief stint as a bank teller before I started teaching. It was a six-month period of my life that I try to suppress as much as possible. Not that being a teller is a bad job. It’s a perfectly perfect job for someone with the personality and temperament for it. I was a misfit from Day One. Talking too much, not paying attention, and counting the minutes to break time were all indications that this was not the right field for me.

This was back in the early 1970’s, and my salary was minimum wage, something between two and three dollars an hour. When I was hired as an adjunct English instructor, I thought I’d died and gone to heaven. Pardon the cliché, but that’s how I felt. I was getting paid a whooping $5 an hour and working twenty hours a week. I’m not a math whiz, but I could see that I’d be working half the hours for twice the money…or so I imagined.

My vision of more money and fewer hours was soon shattered. When I accepted the position, I had no idea how much work I’d actually be doing. Those twenty hours were the classroom hours. No one was paying me for the prep work that included creating syllabi, reading/studying, preparing lesson plans, and creating tests and assignments. Then there was the grading papers part that consumed much of my free time.

The first day of class arrived, and anxious and excited, I stood outside of the classroom clutching my notes, all six pages of them. I glanced to my right and spotted my new dean, surprised to see that he too was giving his notes a last minute glance. It never occurred to me that he might have the first day jitters too. He did, though, and we reassured each other by agreeing that a little positive anxiety was good for our performance.

The 10:00 a.m. hour arrived, and I walked in to meet my first class. There they were, all twenty-five of them sitting quietly and waiting to hear what the requirements and expectations for the term were going to be. As I looked at Rex, Jackie, Wanda and their classmates, my heart was pounding so loudly that I could hardly speak. The fact that I was only a few years older than they were added to my anxiety.

Somehow I found my voice and jumped into the business at hand. I called the roll, distributed the syllabus, and went over all six pages of notes scribbled on my yellow legal pad. Then I gave out some note cards and asked the students to answer three or four questions about themselves before leaving for the day. As the first person rose to turn in his note card, I noted that it was 10:20. All that work, all those notes, all that talking, and it was only 10:20!

That was my first day of teaching, and there was no way I could know at that moment how much I would grow to love the profession. What other job allows an individual to read, write, and share ideas on a continuing basis? Plus, sometimes when you’re sharing some of those ideas, principles, and stories, you see the light come on in another person. You see lives change as people begin to glimpse the possibilities of their own potential.

I’m back to being an adjunct, and my classes began at midnight. The excitement I felt all those years ago while my dean and I waited for the magic hour to begin is still there. What about you? Do you have any first day experiences to share?