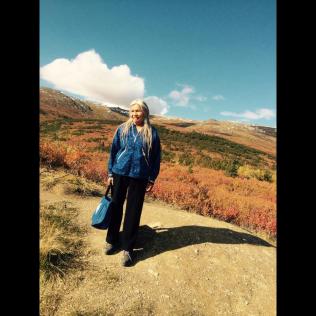 My father visited me in a dream on a cruise ship in Alaska.

Who am I? Where did I come from? Who are my people? Those questions have haunted me for years, and now that I’ve begun writing a family history, I need more answers.

In September, 2015, we went to Alaska with two other couples, and some experiences there reinforced my longing to learn more about my roots, my ancestry. On at least two occasions while on excursions in AK, we heard presentations in which the speakers spoke of the importance of knowing your people.

The first presentation was by Carol Reid a native Athabascan. By this time we arrived at Primrose Ridge, one of the most beautiful places on Earth, we were getting a tad weary of getting on and off, on and off, the bus, but like good soldiers, we complied. No one was prepared for the treat in store for us. A petite gray-haired woman stood on a slight incline, poised to address us. With her long hair flowing behind her in the slight breeze, she shared the history and traditions of her people.

Until that afternoon, I hadn’t given much thought to the various tribes and their languages and traditions. Carol opened my eyes, not only to her own culture and background but to my own as well. I looked at her face and saw the features of her ancestors. She reminded us of the importance of knowing your family as a means of better understanding yourself.

She cast a spell on all of us. Even the tough guys in the group were mesmerized by her words, gestures, and essence. After a moment’s hesitation, I walked over and asked if I could hug her. She smiled as if to say, “Of course,” and I took her up on her inviting expression. I told her that her words had touched my heart and asked if it would be okay to have a picture made with the three gals in our party.

A few days later found us outside Juneau visiting the Saxman village. As a friend and I listened to the young man talk about his heritage as part of the Eagle clan, I was impressed with his pride and loyalty. “You have to understand your people and where you come from so that you can know who you are,” he said.

Who am I? Where did I come from? Who are my people?

The morning after the Saxman village excursion, I awoke from a dream in which I was visited by my father who died in 1998. In the dream, there were tables and people in a large room, and I felt like we were in a school—perhaps the middle school where my daughter worked. I stood at one of the tables busily going through a large box with files in it. Noise and commotion surrounded me.

As I stood rummaging through the box, I felt a presence on my right. I glanced in that direction and was surprised to see my father standing there looking at me, neither smiling nor frowning—just looking. His expression was one of love and peace rather than concern or sorrow. He appeared to be in his mid-40’s and still had black, wavy hair.

“Hey Daddy,” I said, stopping my paper search and resting my hands on top of the box.

“What are you doing here?” I asked.

When I woke up, I lay there trying to recall each nuance, sight, feeling, and sound so that I could recollect them later—always. He didn’t approach me to give me a fatherly hug (that wasn’t his nature), and I didn’t stop what I was doing to give him a big ole squeeze. Neither of us cried out for joy or demonstrated strong emotion. We simply looked at each other, secure in the knowledge that we were connected, that he was “my people.”

Other situations, including visits to Ellis Island, have heightened my desire to know more about my ancestors, and prompted by my daughter Carrie’s example, this morning I sent a DNA sample to Ancestry.com. I’m feeling excited, anxious, and curious. Answers will aid in recording a family history.

If you’ve had a DNA revelation, will you share it? Please.