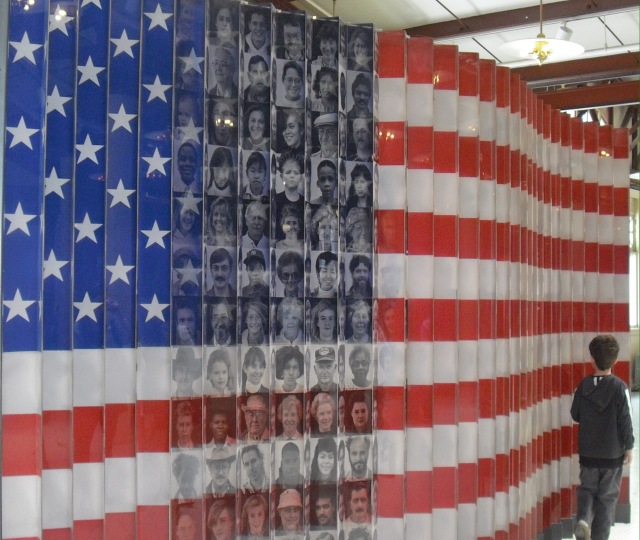 It’s been a while, maybe ten years, since I saw the above flag. Its ginormous size caught my eye, and as I walked by it, the flag began to change. The red, white, and blue stripes and stars morphed into dozens and dozens of black and white photographs. I didn’t know who the people were or where they came from, but I assumed they were either immigrants or their descendants who had emigrated from their homelands to seek refuge in the land of the free.

I’ve read that forty percent of Americans can trace their ancestry to at least one person who came through the immigration center at Ellis Island, the location of that amazing flag and its dozens of faces. On that spring morning, I had wondered away from my friends and was alone when I experienced the exhibit. I gulped. And then I began to examine each face, searching for someone with features like mine. Who am I? I wondered.

My search was in vain. Not one person looked like me.

The futile search haunted me, and the next time I went to Ellis Island, I hustled to the room where I’d seen the flag a few years prior. It was gone. Downcast, I went from hall to hall, room to room, until at last I spied the flag. Just the flag, no faces.

I stared at the familiar icon for a few minutes and then visited exhibits of photographs, audio, and video of people who arrived on the island to be processed before entering New York. Located in the New York Harbor between New York and New Jersey, Ellis Island welcomed millions of newly arrived immigrants through its doors for over sixty years. In fact, estimates are that close to 40 percent of all current U.S. citizens can trace at least one of their ancestors back to this processing center at the mouth of the Hudson River.

Lady Liberty stands proudly in the harbor, her right hand holding a torch aloft. “Give me your tired, your poor, your huddled masses yearning to breathe free,” she says. She stands in plain view from the windows of the Ellis Island processing center, and I’ve often wondered how many American newcomers saw and responded to her.

Quick story. Once at a writing conference, I heard a middle-aged writer tell of his Greek father’s arrival in America. Father and son were fishing on one of the piers in Myrtle Beach, and the teen, in an effort to better understand his father, asked, “Who was the most beautiful woman you ever saw?”

“The lady in the harbor,” he replied, his voice tremulous with emotion.

Born and raised in the United States, the boy was both taken aback and moved by his dad’s revelation.

But back to that forty percent mentioned above. I looked up the name of the first immigrant to be processed at Ellis Island. Turns out it was Annie Moore, a seventeen-year-old who arrived from Ireland with two younger brothers on the S.S. Nevada in 1892. Her parents were already living in New York. Sources indicate that Annie died at fifty and spent her life on New York’s Lower East Side. She gave birth to ten children, and this morning I’m thinking of her descendants.

The first line of my husband’s Ancestry.com DNA report: “Ireland 39%.” No, I’m not claiming lineage to Annie Moore, just reminding myself and all the rest of us, that unless you’re related to a Native American, your ancestors were immigrants too.

*married with children, stepchildren, grandchildren, in-laws, ex-laws, and a host of other family members and fabulous friends *semi-retired psychology instructor at two community colleges *writer
View all posts by jayne bowers →
This entry was posted in Uncategorized. Bookmark the permalink.