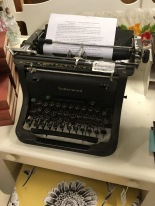 My path to winning 1st place in the Carrie McCray Nonfiction Contest began the year I first attended the South Carolina Writers Association Conference at the Myrtle Beach Hilton. I was a bit overwhelmed with all the activity, the number and variety of classes available, and the presence of agents and editors. In a fever to learn all I could about the craft of writing, I scribbled copious notes in every fascinating session.

During one of the breaks, I struck up a conversation with a gentleman standing beside a long table laden with cookies and beverages. Turns out he was the chapter leader of a writing group in Camden, my hometown. I didn’t even know there was such a group, much less that it was associated with SCWA (SCWW at the time). We exchanged email addresses, and Douglas promised to send some information about the organization and the Camden chapter the following week.

By Monday afternoon, I had all the information I needed to make a decision. I joined SCWA that day and attended a chapter meeting two weeks later. Nervous, I didn’t really know what to expect. Right away, someone asked what kind of writing I did, and when I said, “Mostly nonfiction,” the five people present just gave me a look that said, “Ooooo.”

In response to a question about what I had written lately, I happily said I’d just had an article published in Guideposts about a conflict with a co-worker. The title, “Is It I, Lord?” had already received some snarky remarks on Facebook. Shouldn’t the pronoun be me and not I, inquiring minds wanted to know.

“Let’s look it up,” someone said, and a Google search was on.

What? I thought. Are these people actually doubting the editors of Guideposts? Or worse, are they doubting me? Is this what it’s like to be a member of a critique group?

The decision to stick with this group of writers is one of the best I’ve ever made. From them, I’ve learned to go sparingly with adverbs, to show, don’t tell, and that “fudging” with creative nonfiction is okay occasionally. They’ve taught me to develop characters, describe scenes, and write dialogue.

Our group is an active one. One day, we realized that many of our pieces had a common theme, and we decided to create and publish an anthology. And then we did it again. Some of us have had pieces published in The Petigru Review, SCWA’s literary journal, and other sources, a couple of us self-published books, and one member is writing her third novel. Some have won literary awards, an accomplishment that awes me.

One night a fellow writer handed me the critique of my story and suggested that I submit it to the Carrie McCray Nonfiction Contest. Others chimed in to ditto her encouragement, and I thought Why not? There was nothing to lose and possibly something grand to gain. It was a good story, after all, and one I knew people could identify with. I made the changes recommended by trusted members of my group and pushed “Submit.”

Three months later, I received an email from the editors at Petigru that began with “Congratulations.” I gulped and looked away from the computer at the yellow lantana near the driveway, buying some time. I took a deep breath and continued reading the email informing me about the award, the upcoming conference, and the need to keep the information private for the time being.

Stunned. Thrilled. This was the story of the birth of my grandson who had been blue, unbreathing, and limp at birth. The grandson with whom I communicated spirit-to-spirit as I coaxed him into opening his eyes and staring straight into mine. This infant, Seth Michael, crossed the threshold and “pinked up” before my eyes, a miracle I had shared with the judges and editors of Petigru.

Writing Seth’s story was a labor of love, an arduous one that involved work, not only in getting the story down but also in editing and revising based on suggestions from my friends in the Camden chapter. Seeing “Come On Sweet Boy” in print in The Petigru Review was worth every painstaking, time-consuming correction.

At last year’s conference, I had the opportunity to read some of “Come On, Sweet Boy” to the attendees. It was emotional, not because of nervousness but because of the subject, that mysterious crossing over to the land of the living. I took a deep breath and read the story as a tribute to my daughter, the young woman who gave life to this sweet boy.

I’ve heard that the people with the best stories are the ones who know how to tell them. What’s your story? Are you willing to tell it? Are you willing to work on the writing of it to make it the truest story you can? Do you have some writer friends who can suggest and recommend edits?

Like me, you could write a prize-winning story with hard work and a little help from your friends.

It’s not too late to join us at the South Carolina Writers’ Association Big Dream Conference at Pawleys Island, SC October 27-29. Check out the website for details. http://www.myscwa.org