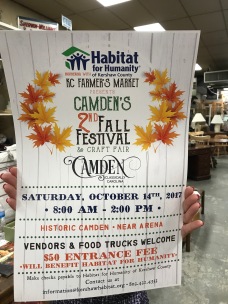 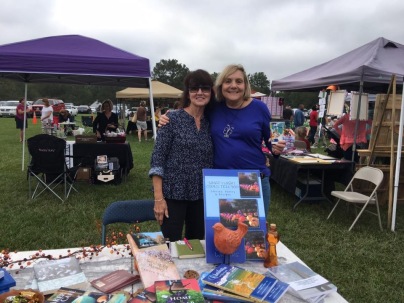 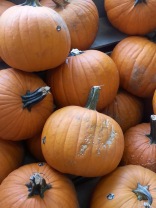 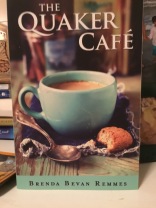 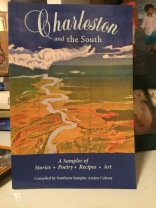 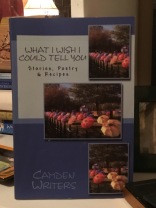 Yesterday was a fine day, an excellent day. We set up our table at the Habitat for Humanity Fall Festival and Craft Show and began hauling books and decorative items from the car. As far as I could tell, I (representing Camden Writers) was the only vendor without a tent. Who knew? Not I. No worries, though. My first customers said they had two tents and indicated I could use one next time.

Next time? Will there be a next time?

In some ways it would have been easier to leave the group’s books at our various homes, packed up in boxes, perhaps stored under a bed. But we had worked long and hard crafting (I had to get crafting in the blog somewhere after being asked what a book had to do with a craft) our pieces, and a few of us decided it was time to be bolder about sharing our stories. As luck would have it, I was the only person available to attend the event.

I was nervous, but things went well. Here’s why: I listened to story after story, a couple that verified the saying, “Truth is stranger than fiction.” I asked questions and learned that there are many people out there who are slogging away on family memoirs and children’s books. I say “slogging” because I think that’s how many writers feel.

One of my props was an orange bowl of chocolate candy, and towards the middle of the day, two boys who appeared to be around ten or eleven appeared and asked about the books. I told them I wasn’t sure they were the kinds of books they’d be interested in, and when one of them asked what they were about, I said, “Stories, just stories people wanted to share.”

“I can tell you a story,” he said, eagerly tearing the wrapper from a Twix bar.

Delighted, I encouraged him. “Wait, let me get my pen and notebook before you start talking.” As he talked, his friend seemed spellbound as he listened to every word. The first draft of Matthias’ story is below. Maybe someday I’ll see him again and help with a second draft and maybe a third and fourth until he gets it just right. In the meantime, here’s what I hurriedly scribbled as Matthias talked.

“Once upon a time there was a tiny pumpkin, tinier than all the tiny pumpkins in the world. All of the pumpkins made fun of him. They laughed. They dumped him in water. He was different from all the other pumpkins. He was fragile. He was a white pumpkin that had orange spots.

“One day Halloween appeared. Halloween asked him if he could drive his deer sleigh. The pumpkin told Halloween, “You don’t want me. I’m just a screw-up.” Halloween looked at him and said, ‘No matter how big or small, you can always help.’”

“So the tiny pumpkin climbed onto the sleigh and gave the kids baskets, treats, and costumes. He gave them 3 Musketeers, Hershey bars, and all the other kinds of chocolate candy. All of the other pumpkins looked at him and knew that after that day the polka dot pumpkin would never be the same.

“The next day he went to see the other pumpkins, and they had a surprise for him. It was a birthday party. He was eleven years old. The pumpkins knew they would always take care of him and look after each other. No other pumpkin, big or small, was ever alone again.” Matthias Fox

Will there be a next time at a craft show, book festival, or community event? Definitely. Otherwise, I might miss hearing some cool stories and meeting some interesting people.

1 Response to The Polka Dot Pumpkin