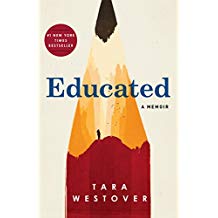 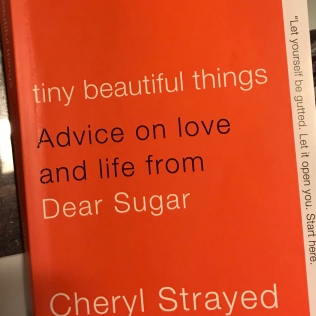 I’ve read bits and pieces of several interesting and fascinating books, and the two I’ve devoured most recently are Educated by Tara Westover and tiny beautiful things by Cheryl Strayed. Both are nonfiction, and both are honest, powerful, and engaging. That’s where the similarity ends. Westover’s book is a memoir; Strayed’s is a compilation of advice columns by Sugar.

A writer friend recommended Educated to our writing group a few weeks ago, but when she mentioned that the author was Mormon, my guard went up. Remembering my religious affiliation, she said that perhaps Westover’s family was part of a fundamentalist group and then moved on to share a few details of the book.

The writer and her siblings worked for their father in a scrapyard, and she never saw a doctor or attended school. While homeschooling is popular today, this was decades ago, and their mother wasn’t as structured or diligent as parents are today. And Tara Westover had never been vaccinated until she needed a passport to travel to England. She had no birth certificate either. Both were needed so that she could attend Cambridge. Yes, Cambridge.

But I’m getting ahead of myself. Strong-willed, Tara overcame daunting obstacles that would deter most people, me included. Accepted to BYU at age 17, she didn’t even understand what a “text” was; nor had she heard of the Holocaust or the Civil Rights Movement. When she saw films in her history class portraying scenes of civil unrest (understatement) in the 1960’s, she became confused. Didn’t Lincoln free the slaves 100 years earlier?

Westover studied and became enlightened, not just about social injustice but also about art, music, religion, philosophy, literature, trigonometry, psychology, history, and all the other courses required for a basic undergraduate degree. She was introduced to topics such as hegemonic masculinity, positive and negative liberty, and the subjection of women. Westover began to construct her own truth, something that would cause problems with her family.

Encouraged and helped by many individuals, Westover earned an MPhil and a PhD from Cambridge. She was also a visiting fellow at Harvard.

Westover’s education came at a cost. At the end of the memoir, she is estranged from her parents and three of her siblings, not because of her education per se but because of her unwillingness to lose custody of her own mind.“What is a person to do, I asked, when their obligations to their family conflict with other obligations—to friends, to society, to themselves?”

Educated is not about Mormonism, junkyards, or homeschooling. It’s about resilience and determination. It’s about a young woman overcoming tremendous odds by learning that the most powerful determinant of who we become is inside us.

Though totally different, tiny beautiful things is a marvelous book, too. Based on an advice column titled “Dear Sugar,” it’s filled with letters to Sugar asking for advice on love, heartache, disappointment, and suffering. From cancer to adultery and death to Christmas, Sugar responds with tough, shrewd compassion. She doesn’t candy coat her responses or pull any punches. And yet…and yet, no one who reads her replies could dispute her genuine concern and compassion for her advice seekers. She calls them “sweet pea” and signs her letters, “Yours, Sugar.”

More on Sugar and tiny beautiful things tomorrow. Until then, take her advice and remember that “every last one of us can do better than give up.”