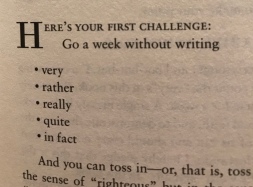 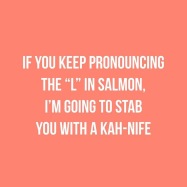 Intrigued by a friend’s comments about her personal use of the exclamation point, I clicked the link she had posted a to a New York Times’ article about Dreyer’s English: An Utterly Correct Guide to Clarity and Style. That title! I mean, it takes a lot of verve, confidence, and chutzpah to claim one’s guide as utterly correct. And I know the author wouldn’t like that exclamation mark.

I knew I had to have that book ASAP and ordered it that very hour. It arrived two days later, and I’ve been enjoying Dreyer’s advice, suggestions, and voice ever since. He’s funny but serious, knowledgeable but not pedantic, experienced but not condescending. I have a dogeared copy of Strunk and White’s The Elements of Style, an up-to-date edition of The Chicago Manual of Style, and two Grammar Girl (Mignon Fogarty) books, my favorite being The Grammar Devotional: Daily Tips for Successful Writing from Grammar Girl. Those are my go-to sources, so why did I order the ultimate guide and why am I liking it so much?

I ordered it because I’m about to begin an editing project and need all the help I can get. And I want that help to be delivered by a practicing expert, one who walks the talk, someone like Dreyer who’s the copy chief at Random House. Now that I have the guide, I like it because it’s an invaluable tool, a veritable treasure chest of information, some new and some old. As a person who’s worked thirty years as a copy editor, Dreyer is committed not only to what he does for Random House authors but also to helping anyone who wants to improve their writing. I’m not sure whether the correct pronoun should be his or her, his, her, or their so I stuck with the latter. When I come across his advice, I’ll let you know.

I need to use fresh terms. On the first page of Chapter 1, Dreyer challenges his readers to go one week without using very, rather, really, quite, and in fact. I gulped. Those are some of my mostly commonly used words. He goes on to recommend tossing out just, pretty, of course, surely, and that said. And that’s just on the first page. I’m in trouble, I thought. (Incidentally, Dryer doesn’t recommend the use of Italics when expressing a writer’s thoughts, but well, I’m in the learning stage.)

It took only a few seconds to construct a silly sentence using six of those words/phrases. It would really be very hard for me to go just one day without writing these rather common words and quite impossible, in fact, to go a week. Dreyer isn’t asking me or any other readers to eliminate the words forever, just one measly little week. I’ll try.

I can use the Oxford comma if I so desire and ignore the know-it-alls who tell me it’s passé. Dreyer says, “Only godless savages eschew the series comma.” Whether you call it series or Oxford, use it. In the first sentence below, I’m visualizing green beans folded into chocolate pudding. In the second, I see them as separate dishes.

Dreyer says that certain prose rules are essentially inarguable. For instance, a subject and verb should always agree in number. At the same time, he claims to be an “enthusiastic subscriber” to the concept that rules are made to be broken—once you’ve learned them. He shares a humorous story about a hoity toity person who got her just reward after haughtily correcting someone who ended a sentence with a preposition. And Dreyer says it’s okay to begin a sentence with And or But.

So far, I’m loving this utterly correct guide, even in the places where I could say “guilty as charged.”