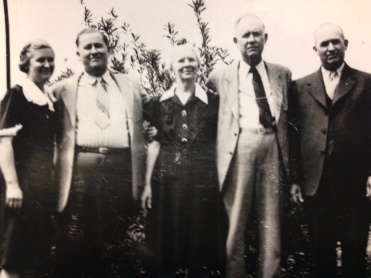 I should have known I had some serious editing to do when my friend and grammar guru suggested that we meet to go over her proofed copy of my family history. I’d been working on it for a year and a half and thought I was DONE.

After self-publishing the volume with CreateSpace (now Kindle Direct Publishing) in March 2018, I vowed to take a breather from another such project for a long, long time. As far as I could tell from spot checking several pages, the finished product looked fine. People, especially the younger generation, enjoyed reading it, and one of my daughters even posted about about it on Facebook while on a cross-country road trip.

Then one day I succumbed to the temptation to check the accuracy of a date.  After that, a cousin told me a story about our grandfather, and I had to find a way to include it. That one teensy weensy paragraph wreaked havoc on the formatting, but if I wanted to include the story, I had to pay the price. The story told of a tender father/daughter moment and was too sweet to ignore, so I included it…and corrected the inaccurate date. I also changed the font size of a poem and added three photographs. All those changes were good, but there were repercussions. Print jumped from the middle of one page to the top of another, leaving blank spaces.

When I sent for proof copies, I accidently ordered two, and a friend generously volunteered to proof a copy for me. Family events and a serious sinus infection postponed our meeting, and I wondered if we could just talk on the phone. I mean, how involved could the editing be? I could tell from her query about where we could meet that there was more to take care of than a phone call could master.

We met in Georgetown, SC, and after lunch at one of our favorite restaurants on Front Street,  we spent about an hour sitting on an outside bench painstakingly going over each page of the book. Each page. Painstakingly.

Feeling the gentle breeze and watching the world along the waterfront made the work less grueling—more pleasant. One of the river cruise ships docked in the harbor, and dozens of happy, chatting passengers walked by us leaving a whiff of sunscreen in their wake. A motley crew, they had learned a lot about rice plantations and visited a small island. Daunted by all the things my friend suggested that I fix, I soon became distracted by a busy pigeon atop the restaurant.

“Do you really need to use crepuscular?” she asked about a twilight scene in a cemetery.

“I guess not. But I really like the word.”

“I like it, too, but that doesn’t mean it’s the best word for the scene.”

Most of the suggested edits involved missing commas, American rather than British spelling (meager vs. meagre), too many colons, spacing issues, missing words, repeated words, and hyphens. Easy fixes. It’s just that they were indeed fixes, something I’d have to work on to get as perfect as possible. Although I’d been saying it was “just” a family book, I realized I needed to strike through just. Families are important, not only the ones about whom my siblings and I were writing but also the future generations who might have an interest in a pistol-packing grandmother or a great grandfather with a sense of humor.

I procrastinated a few days, but Monday I began the revisions. They took all the livelong day and added two pages to the final page count. Monday night I reuploaded the manuscript to KDP and decided to change the cover. Why not? That took another hour or so, but as the midnight hour approached, the latest edition was ready to be proofed. I proofed the changes with an online reviewer but opted to order a physical proof, too.

Writing is a process, a hard one, and you need more than one set of eyes to read your manuscript. While we might balk at suggested changes, keeping our readers in mind will nudge us to do the right thing, to go the second mile. I hope my resolve stays strong  when I look at the Friday’s proof.

1 Response to Crepuscular or Dim?