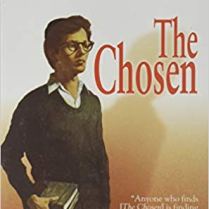 A couple of weeks ago, I sat on the sidelines with my son and daughter-in-law watching my seven-year-old grandson play baseball. I felt my chest tighten when he came up to bat and wondered about my anxiety. Ethan got his stance just right and stood confidently facing the batting box. Things went well. As I recall, he ran to first base and was able to score a run before his team took the field.

Of all the games I’ve watched in my life, that was the most riveting. And I think it was because I had just begun reading Chaim Potok’s The Chosen, a novel that begins with a game between young Orthodox and Hasidic boys living in the Williamsburg neighborhood of Brooklyn toward the end of World War II. From their coaches and uniforms to their seriousness about the game, I knew this was no ordinary game and that the entire scene from start to finish was a metaphor for what was to follow.

Wearing their “regular” clothes, the Orthodox players watched with wary amazement as the Hasidic team marched to the sandlot dressed completely alike, all wearing white shirts, dark pants, and black skullcaps covering their closely cropped hair. The fringes of their traditional undergarments showed above their belts. The Orthodox boys were coached by a gentile athletic coach who was intensely involved in the game; the Hasidic team was accompanied by a young rabbi who basically sat on the sidelines reading a book—that is, until the game got intense.

I finished the book two weeks ago, and the baseball scene remains in my mind like a memory. I can see, feel, and hear everything as if I were there. When Danny Saunders pitched a fast ball hitting Reuven Malter’s glasses and knocking him down, I gasped. I’d heard that all sports could be brutal, but this was different. Did Danny intend to wound Reuven so viciously? Was he going to lose his eye?

Reuven is taken to a hospital, and before he leaves a few days later, the reader has learned a lot about the central characters. Danny’s father is an Hasidic rebbe who led his congregation out of Russian bondage to America. Reuven’s father teaches Talmud at an Orthodox school. Little mention is made of their mothers or of women in general. Reuven’s mother is deceased, and he and his father have a woman who cooks and cleans for them.

While Reuven is in the hospital ward, Danny comes to apologize for hurting his eye, and although Reuven is angry at first, a friendship between the two boys begins to develop. The rest of the novel centers around the friendship between the boys, both Jews but each different in their relationship to their fathers and in their religious beliefs and practices. Although one is Orthodox and one Hasidic, both live within insulated Jewish communities. There are no outsiders there.

Is The Chosen a coming of age book? Yes, but it’s much more. Is it about fathers and sons and the imparting of generational wisdom? Yes again. It’s also about culture and how it affects all of us—Jew and Methodist, Hispanic and European, male and female, royal or common.  We tend to think of our culture as “the one,” and are often surprised, perhaps even aghast, at the way others conduct their lives. Interestingly, when Potok goes to Korea as an adult, he finds himself in a culture that didn’t know or care about Jews or Judaism. How can that be?

There’s competition and striving, not just to win the game but to win at life, one’s own life and not necessarily the one others have chosen for us. You’ll have to read the book to find out whether the two friends follow the paths their fathers have chosen for them. All I can say is that whether they become a rabbi, psychologist, yeshiva teacher, or storekeeper, they adhere to the principles of traditional Judaism.

Not only is Potok a marvelous story teller, but he’s a great teacher, too. I was with Reuven in the hospital as he lay wondering about whether he’d lose his eye, with him and his father drinking tea together, with both Reuven and Danny during the sessions with Reb Saunders, and many other instances too numerous to mention. But the icing on the cake was how well Potok introduced his readers to another world. He gave me a peep into the world of Judaism and taught me about practices and beliefs and terms heretofore unknown. I like knowing what gematria, yeshiva, apikorsim, and Kabbalah mean even if I never have a chance to use them outside of a blog.